The New York Times posted a list of innovations that are currently in concept mode. The introduction of the article describes the original failure of the electric light bulb and points out that most innovations and successes are the result of much trial and error.

I have heard it said before that most successful people do not see a failure as an end, but rather as an opportunity to try another path. I like that mindset and try to think that way whenever possible. 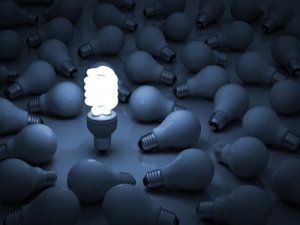 The list of innovations in the article sounds so futuristic – I guess it is, by its very nature, futuristic. The list includes things like electric clothes that enable your body heat to power gadgets and video games on subway straps that people hold when they ride the subway.A sampling of the ideas – there are 32 in total – includes:

A mind-reading shopping cart (I like this one, although if it really read my mind , who knows what would end up in my cart – but I may not mind if it would actually shop for me!)

These ideas seem far-fetched, but when I think back to my college days in the early 90’s, e-mail and iPhones would have seemed pretty far-fetched if you had described them to me; in fact, the internet would have sounded the most far-fetched of all!

Sometimes I wonder what changes will occur over the next decade and how I will adapt. Things change at such a rapid pace and at times I find it difficult to keep up. I have to admit that I don’t even understand what Pinterest is! (Feel free to educate me in the comments section, as I know many bloggers are very skilled in this area.)

I also wonder whether a failure to keep up with technological innovation has become the dividing line between who is considered employable and who is considered an unskilled worker. What will this mean for kids who do not have access to much technology? Students leaving college now grew up with this type of rapidly moving innovation and have learned to adapt to the changes. What will that mean for those of us who are running to catch up?

What do you think? Do you picture yourself using any of the technologies listed in these articles? What changes have occured in your lifetime that you never thought were possible? Do any of these ideas make you uncomfortable? How do you try to stay up on the latest innovations? Do you have an idea that is not listed here or any suggestions for budding inventors who may have an idea they would like to create? Have you ever had an idea that failed spectacularly but then led to something that succeeded? Do you think that an understanding of how to use a wide range of technologies will become as important as a college degree? Or do you think that this will just be one of many characteristics that employers will be looking for?

I hope you will add your thoughts. And thank you for reading!

28 responses to “Meet the Jetsons: New Ideas for Innovations”

What do you think? (Note: please check "follow comments" after leaving your comment so you will be notified by e-mail with replies.) Cancel reply