This song spoke to me from the first time I heard it. Maybe because I had recently moved to Austin, Texas and was seeking out some wide open spaces of my own. The line “Dad yells ‘check the oil'” just really hit home for me.

This song tells a common story with wonderful imagery and emotion.

This week, for Tunes Tuesday, I bring you Wide Open Spaces by the Dixie Chicks.

Who doesn’t know what I’m talking about
Who’s never left home, who’s never struck out
To find a dream and a life of their own
A place in the clouds, a foundation of stone

Many precede and many will follow
A young girl’s dream no longer hollow
It takes the shape of a place out west
But what it holds for her, she hasn’t yet guessed

She traveled this road as a child
Wide eyed and grinning, she never tired
But now she won’t be coming back with the rest
If these are life’s lessons, she’ll take this test

As her folks drive away, her dad yells, “Check the oil!”
Mom stares out the window and says, “I’m leaving my girl”
She said, “It didn’t seem like that long ago”
When she stood there and let her own folks know

What do you think? What is a song that tells of a common human experience for you? Or a song that got you through a certain phase in your life?

Helicopter Parents and Tiger Moms: Turns Out Neither Knows Best 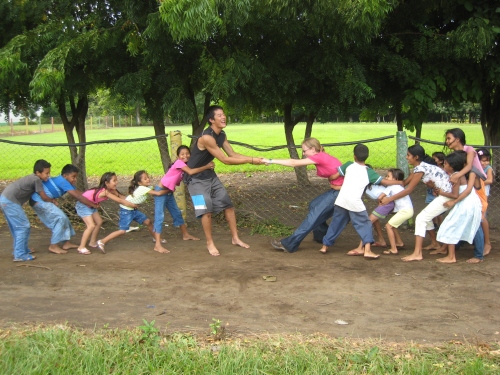 There was an opinion piece in the New York Times this weekend called “Raising Successful Children” which generated quite a bit of discussion.

The article examines the latest parenting research which found that giving children autonomy and allowing them to make mistakes leads to the best long-term outcomes.

My parents did a great job with this. I was sent to a sleep-away summer camp for the most of the summer every year in my formative years. I feel like this helped shape who I am more than almost anything else.

I worked for a wonderful organization called Amigos de las Americas which provides opportunities for young people to live in remote villages Latin America, where their autonomy is simply not in question.

These types of experiences can really help young people develop confidence in their abilities. The Times article lays out research to prove this hypothesis.

But it seems that it has become harder for parents to give their children space to make mistakes and to develop their independence. The article points out that there has been much attention devoted to “helicopter parents” and “tiger mothers” in the news in recent years.

I am not a parent and I can imagine that it would be difficult to find the balance between protecting your children and letting your children forge their own path. But I am intrigued and curious about what makes it more difficult for parents to do this today than when I was younger.

Certainly, when I was younger, we had parents who lived vicariously through their children, but I don’t feel like there was quite as much of what I see as overprotecting children.

What do you think? Do you think that parents are more protective now of their children that when you were young? Do you think this has to do with the increased dangers in our society like gun violence and crime? Do you struggle with this as a parent? Have you found any tips or strategies you would like to share with others?

I would love to hear your thoughts. Thank you for reading.

The Ritalan Generation: Why do some children fall behind in school? (newsofthetimes)

The Power of Strengths and Weaknesses: Giving kids permission to just be (newsofthetimes)

A New Kind of Playground: What happens when young children are connected with technology? (newsofthetimes)

Secrets to a Long, Happy Marriage

Marriage is hard. We hear this all the time.

There is an article in the New York Times this week called The Wedding Effect, which really touched me.

The author is 29 years old and the article provides an honest, almost raw portrayal of her fears and skepticism regarding marriage. She calls marriage a “daredevil leap of faith,” which I think describes it perfectly.

The article held my interest for several reasons.

First, I could have written this same article at 29. My parents divorced when I was quite young – I think I was six. I was fortunate to have grandparents on both sides of the family who lived beyond 80, but both of their spouses died young.

When I was growing up, I had very few examples of marriage working through thick and thin. I had friends whose parents were still married and I remember being fascinated when I would occasionally hear their parents fight because I didn’t think people whose parents stayed together fought. I thought fighting meant divorce.

My husband and I have been married for five years this year. That feels like quite an accomplishment.

But this article reminded me of fears that I know are deeply embedded in my psyche about whether marriages can last. I am very happy in my marriage, and know that these questions come from that obnoxious inner voice whose words I simply need to hear and let go, much like the inner messages we hear telling us that we are not good enough.

From our small Baltimore wedding – we had two! Same dress…:-)

Whenever I meet couples who have been together for years, I ask their secret for a long marriage. This is not an attempt to make conversation. I am simply trying to place as many tools in my toolbox as I can to keep my marriage strong and to make up for the fact that my experience in my immediate family seemed to illustrate that only second marriages survive.

There is another interesting component to this article which is related to conversations we have had on this blog about women in the workplace. So many women have chosen to focus on their careers before marriage and before having children.

As I have written before, this can lead to women finding that by the time they are ready to have kids, their biological clocks have run out.

It is a cruel trick of nature and science definitely has it backwards on this one. I am quite confident I would be a significantly better parent now that I am 40 than I would have been at 21.

What do you think? I would love to hear thoughts and advice for what keeps a marriage strong and healthy, through good and bad. What makes second marriages more successful? How do you silence the voices that question if your marriage is perfect? Is any marriage perfect? And do you think the fact that so many people came from homes with divorced parents is leading to later marriage? What impact do you see this having over the long term?

I would love to hear your thoughts. Thank you for reading.